This post is inspired by my recent visit to Hiroshima in Japan. Whilst there, I had the chance to visit the Peace Park and Peace Museum. Unfortunately, the latter was under refurbishment at the time, and therefore only half of it was open. The museum did, however, provide incredibly valuable and poignant insight into the effects of the bomb on the citizens of the city. When we visited, it seemed that the exhibits focused only on the detonation and aftermath, and did not encompass the context behind the bombing at all. Presumably, this will be addressed by the renovations.

On the 6th of August, 1945, at 08.15 AM a “Little Boy” atomic bomb was dropped above Hiroshima. It was detonated 580 m above the city, directly above Shima Surgical Clinic. Almost 150,ooo people in total were killed or injured by the bomb. 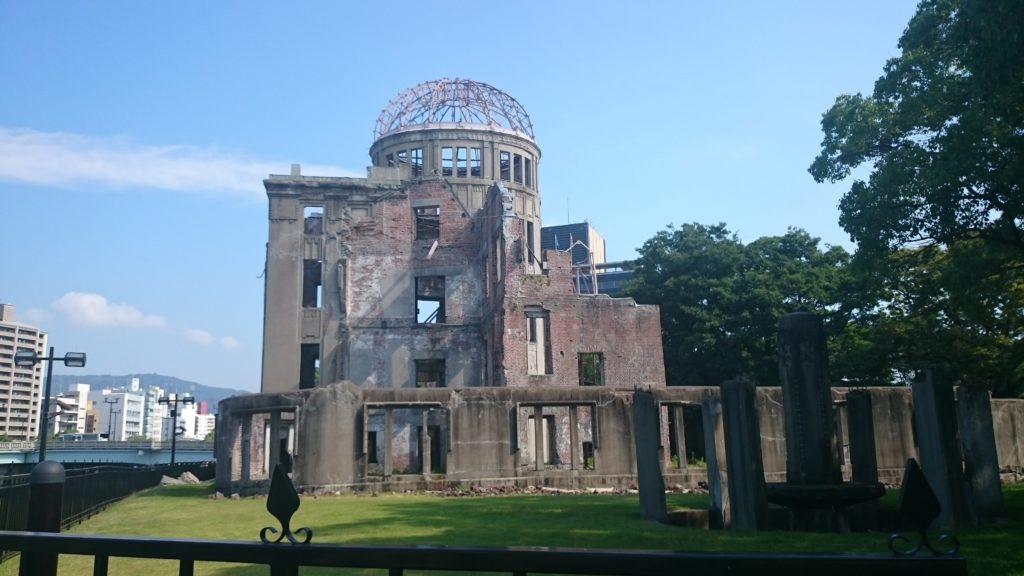 Sadako Sasaki was two years old when the atomic bomb struck 2 km from her home. She was seemingly uninjured by the blast or aftermath. However, at the age of 11, she developed cancerous swellings around her glands. These swellings led to a diagnosis of acute malignant lymph gland leukemia.

There is a Japanese myth that promises a wish to anyone who makes 1,000 origami cranes. By the end of August 1955, Sadako had made more than 1,000 cranes, wishing that she could survive her cancer. By the end of October, she had died. Sadoko’s death led to the building of a memorial for all children who had died from the effects of the bomb.

Sadoko’s story led to further research interest into the long-term effects of radiation. Because people were exposed to the radiation in different forms, the effects manifested in different ways. The long term effects of the atomic bomb included blood disorders such as anemia, cataracts, tumours and keloid scarring around healed burns. As these long term effects were not previously explored, it was not possible to predict them. There are several kinds of radiation. Alpha and beta radiation do not have high penetrating power – that is, when they reach the skin, they cannot pass through and therefore do not affect the internal vital organs. These kinds of radiation cause skin effects such as burns, or can have wider effects if ingested as contaminated water or food. Gamma and neutron radiation have a high penetrating power, and therefore pass through the skin. Because of this, full body exposure to gamma radiation leads to the symptoms of radiation sickness (nausea and vomiting, falling blood counts, infection).

As the effects of radiation were not widely known, it is likely that many of the aftereffects of the bomb were caused by contamination of the water supply or exposure to “black rain”. These symptoms in particular are associated with radiation sickness due to the internal effects of radiation. Radiation damages DNA and other molecular machinery within the cell. This means that the symptoms are linked to newly synthesized cells, and they manifest most quickly in rapidly-dividing tissues (hair, blood, skin).

This bomb was the first of its kind to be used in warfare, and no one could fully predict the long term consequences for those surviving the initial blast. The Atomic Bomb Casualty Commission (ABCC) was established in order to conduct long term studies of those survivors. This commission later became the Radiation Effects Research Foundation (RERF), and the study findings can all be found on their website.

These studies are incredibly valuable in understanding the different conditions in which radiation exposure plays a part. Through the voluntary cooperation of tens of thousands of survivors, we have learnt that cancers have higher incidence in A-bomb survivors. There was no evidence of an increase in other mortalities than cancer in the group – presumably because cancer is the disease that specifically stems from damage to DNA and other growth/death mechanisms in the cell (which is specifically what radiation causes).

From an academic point of view, the existence of such a long-spanning study is extraordinary, and it has value beyond its “limited” purpose of studying A-bomb victims. If we followed other patient groups for a life span, we could learn so much about both inherited and environmental factors’ roles in any disease.